Series: Routledge Studies in the History of Russia and Eastern Europe

The concept of “competition” is usually associated with market economies, but this book explores how competition operated under state socialism in the Soviet Union and Eastern Europe, where the socialist system, based on command economic planning and state-centred control over society, was supposed to emphasise “co-operation”, rather than competitive mechanisms. 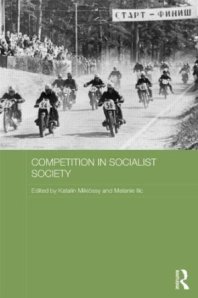 The book considers competition in a wider range of industries and social fields across the Soviet bloc, and shows how the gradual adoption and adaptation of Western practices led to the emergence of more open competitiveness in socialist society.

The book includes discussion of the state’s view of competition, and focuses especially on how competition operated at the grassroots level. It covers politico-economic reforms and their impact, both overall and at the enterprise level; competition in the cultural sphere; and the huge effect of increasing competition on socialist ways of thinking.

1. ‘To Catch Up and Overtake’ the West: Soviet Discourse on Socialist Competition, Jutta Scherrer

8. The World Youth Festival as an Arena of the ‘Cultural Olympics’: Meanings of Competition in Soviet Culture in the 1940s and 1950s, Pia Koivunen

9. Mole Holes in the Iron Curtain: The Success Story of the Krtek Animated Films, Riikka Palonkorpi

Katalin Miklóssy is an Assistant Professor in Political History at the Aleksanteri Institute, University of Helsinki, Finland

Melanie Ilic is Professor of Soviet History at the University of Gloucestershire, UK